‘Casa IAIA’ is a special project, it is the culmination of more than ten years of experience in the rehabilitation sector, more specifically, in the residential sector and the realization of a dream, to reform your own apartment. Client and Architect merge as a single person, with the luck of having the entire September Arquitectura team, to contrast and enhance ideas.

It is curious, when you do a project, as a designer the process is clear, you objectively analyze the possibilities of the space, you listen carefully to the needs of the client and you begin to draw a straight path by which all the concepts and details are defined. From the designer’s point of view, there are no doubts, the line is clear, pauses are needed and appreciated, where one can take a distance to have another angle of vision and above all, to listen more to the client and understand their uncertainties. But when the project is for oneself, the road is full of curves, you become the client who is not clear on which piece to choose.

Luckily at Casa IAIA, the project was simmered, the apartment had been empty for some time and there was no initial urgency to occupy it. This allowed it to be created little, finding and removing the essential ideas of the superfluous. Blurring the infatuated images, of which we are so stimulated today and that end up contaminating the project because they are decontextualized. To stay with the essence, the relationship between the  spaces, the configuration of the building with its advantages and its conditioning factors, functionality, energy efficiency, aesthetics and special care in detail.

The functional program starts from a house for 5 family members, where you can enjoy large spaces and large quantities of light, almost excessive, especially in the hottest months. The starting point is a three-wind penthouse, facing south-east and with an almost square floor plan, equipped with a large glazed area where magnificent views of the city, sea and mountains rise.

The project respects the original functional structure, keeping two bathrooms in the center, which allow the use areas to be clearly separated. On the one hand, we have grouped the day area with access, the open kitchen and a large living room, while on the other we have the night area, through a hallway there are three bathrooms and two large rooms, one of them studied to divide in two in the near future. Two major functional challenges arise, such as solving the relationship between the access space to the house, the kitchen and the large dining room and redistributing the suite with its three parts, the use area, the bathroom and the dressing room.

The first one is solved by turning the kitchen, separate from the facade where cozy office space is created and protecting it with a large oak wood cabinet, which visually separates both spaces and at the same time acts as a shelf towards the hall. This same piece of furniture turns towards the dining room, where it is interrupted by the large kitchen worktop, thus creating a bar area, allowing you to cook while looking at the entire city, but which at the same time collects the kitchen creating intimacy between the spaces. To finish realizing this solution, the hall is also paneled with the same wood as the furniture, thus extending the materiality and enhancing the play of light in the most exposed spaces. That is, it is accessed through the most secluded and warm space, which gives access to two large interconnected and well-lit spaces, the kitchen and the dining room.

The second challenge, the distribution of the pieces that make up the suite, is solved by defragmenting the sink and invading the night space with the shower, this is drawn in the shape of a hemisphere, thus avoiding aggressive corners that penetrate the room. This gesture admits occupying a space lost by circulation while allowing the shower to offer views of the entire city. To finish consolidating this distribution, the volume is painted green, making it the protagonist of the space and thus dividing the bathroom area with the dressing area.

The proposal of materials is honest, it highlights the original constructive solutions of the building, chipping the concrete pillars and leaving it exposed. In the kitchen, a glass white granite is chosen, a great classic that, although it has a great quality-price ratio, is no longer much in use today. This granite contrasts with the oak wood of the kitchen furniture and the floor of large porcelain pieces, creating an elegant aesthetic with an eighties wink. In the dining room, the existing marble fireplace is replaced by a Pellet one, which will serve to heat that area in the winter months. This is installed on a concrete cabinet, creating a game with the existing pillars. The sofa is the other protagonist, the large custom piece is created, which organizes the entire space of the living room, it is accompanied by three puff-type modules, which allow you to create a large L-shaped sofa or play with the modules such as auxiliary armchairs or footrests, creating a huge “chaise lounge”.

The original floor is respected, an oak parquet that enhances the existing nobility. To resolve the conflict between different types of wood and lower costs without losing quality, varnished MDF is used as the main material in the night area, using it on doors, wardrobe fronts and desk furniture.

To protect the house from heat losses due to its large façade and roof surfaces and excess solar radiation. All the carpentry is exchanged for brown wood with good transmittance, external awnings or adjustable blinds are provided for the most exposed openings and the entire roof is thermally insulated while enhancing cross ventilation. Thus allowing to considerably reduce energy consumption. The result is a home with large spaces, which responds 100% to functional needs, creating a practical space for users without giving up personalized aesthetics and comfort.

Collaborators:
Construcciones Varela, Made of Wood 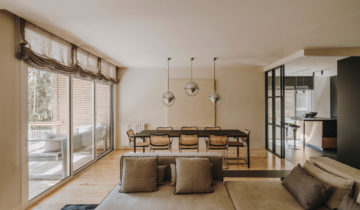 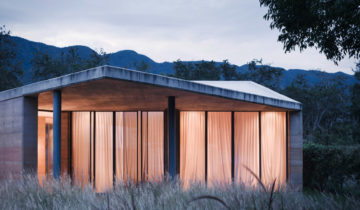 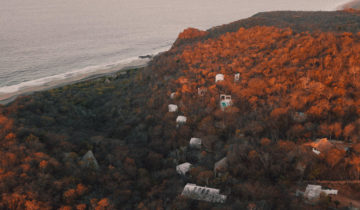