After almost two years closed, Wittmore Hotel reopened its doors on February 10 with a new concept that draws from its location in the Gothic quarter of Barcelona, ​​specifically in the suburbs of the first wall of the city of Barcelona. Thus, Wittmore preserves that spirit of freedom typical of the extramural areas and is inspired by the entertainment venues where the most creative personalities of the local culture and the bourgeois houses of the most avant-garde Catalan society were concentrated.

Of course, we have been there several times, but we still haven’t found it the first time. It is hidden in a dead end where you come to doubt your own way out. Its location in the Gothic, distills the spirit of the souk of Marrakech where, once you find it… Surprise! An oasis with the largest vertical garden in Barcelona, ​​natural fabrics and if you look closely, there is a blackbird’s nest in that little hole.

Wittmore Hotel understands luxury as something intangible and ephemeral, linked to serendipity, to the unique experience that is born from the fleeting union of several factors, creating unrepeatable moments.

Stripping the walls to show imperfect entrails that do not pretend to be anything more than what they are. Cracks filled ready to be painted again and again. When you enter, you feel in a new but familiar space. In the interior design, we wanted to bring the place closer to the city and the local context. It has been quietly opened. 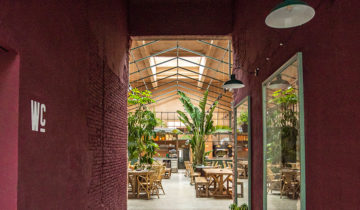