Architecture must frame the history of buildings, respect original techniques and materials as if it were a work of art. At the same time, it needs to adapt it to the exigencies of modernity. Applying this concept to a building helps to value the pre-existing and to see things from another perspective.

The project starts from a small PB + 1 building between party walls, located in the old town of Sarria, Barcelona. Originally it was a family home, later it housed a lamp factory on the ground floor, finally in a multidisciplinary space open to the public on the ground floor and a home on the first floor. With such a varied and demanding functional program, added to a reduced surface. The romantic vision of the work of art has to adapt and fulfil the required functions. To respond to this demand, the architecture evolves incorporating new, more flexible and sustainable solutions.

The focus of the project, therefore, is based on rehabilitating the house in detail, including an extension of it and thus obtaining a greater useful area. To do this, the building is widened at the back and an underground plant is built, also destined for commercial space and a multidisciplinary space. Integrating the two spaces while respecting the privacy of the house is one of the challenges of the intervention, this is solved by creating a large latticework on the rear façade, made up of large horizontal planters, you create a skin that prevents visual interaction between the patio of the premises and the balcony of the house, but which, in turn, allows the passage of natural light, enhancing the growth of vegetation and protecting the house from excess sun exposure in the months of excessive heat.

Inside, the laminated wood panels are used as a structural and division solution between spaces. The horizontal structure doubles, this resource allows the original ceilings with Catalan backing and wooden beams to be rescued from the premises and to comply with the requirements of public space regulations. At the same time, the same solution is adopted to separate the space of the premises from that of the house, thus solving structure and finish in a single element and material.

The overall project is intended to recover the original textures. Stone, brick and wood, therefore, are very present. The stone and brick walls have been preserved, as well as the wooden beams. This material is also applied and stands out on doors, on the ceiling panels of the business, on the structural wall of the same and on the staircase of the house. The other main material is concrete, it is present in the latticework of the rear façade, in the wall that takes you to the basement where the concrete is formwork with wooden boards, creating a game of ambiguity between both materials and especially on the ground floor. underground.

Anaesthetic unification is manifested between existing and new materials. In the house, wood is combined with white, applied to the walls, kitchen furniture, living room and metal stair railing. This integrity, in turn, is in harmony with the original stone walls and work of the building. To achieve the maximum luminosity in the house, a longitudinal opening is created in the roof, which accompanies the entire route of the staircase, starts at the lowest part of the building and ends on the roof, converted into a walkable terrace.

The house, as we said, is diaphanous. The only compartmentalized spaces are the sinks and a room that could be converted into two small bedrooms through a sliding panel. The circulation spaces are used as a dressing area for the rooms. The staircase that connects the first floor with the roof is another of the main elements since it serves at the same time as a kitchen, storage area and living room.

The project pushes us to intervene in an architectural past while avoiding complicated construction solutions. The result is two open spaces that differ from each other, at the same time that respect and are complicit in the pre-existing materials. In the premises, a more eclectic style prevails while the house seeks cleanliness and minimalism. 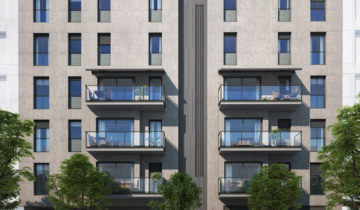 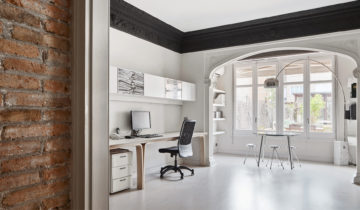 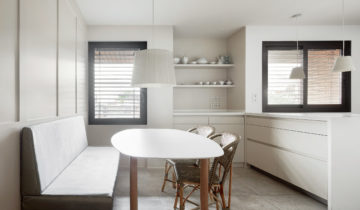